An independent review into the integrity of the 457 visa regime commissioned by the Department of Immigration and Border Protection (DIBP) has now been released. The review has been praised by the Minister for Immigration and Border Protection (DIBP), the Hon Scott Morrison, who issued a statement saying that the report provided a “balanced and measured” view of the 457 visa programme. Whilst there is as yet no specific implementation date, it is expected that in the coming weeks or months the Government will provide a response to the report.
The independent review commission by the DIBP included a four person panel whose purpose was to “recommend a system that, operating in the national interest, was sound and resistant to misuse (the “integrity” goal), and, at the same time, flexible and able to respond quickly to economic and business changes (the “productivity” goal).”

The main recommendations of the “Robust New Foundations: A Streamlined, Transparent and Responsive System for the 457 Programme” report worth noting are as follows: 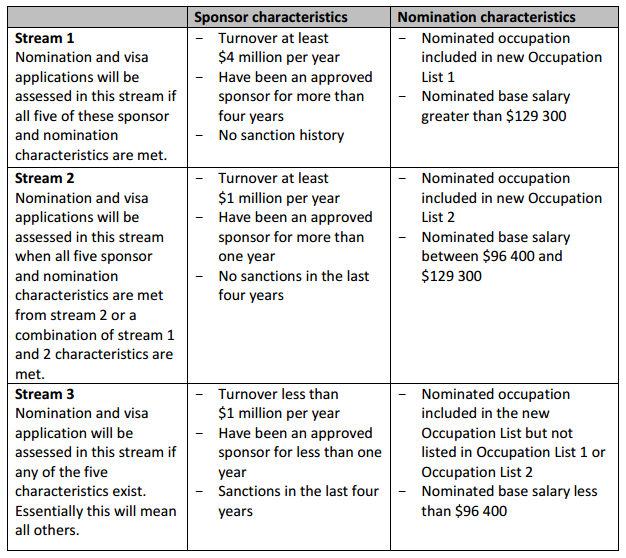 A full list of the 22 recommendations suggested by the independent review are stipulated in the report to be as follows:

1.1 That, in lieu of the existing Ministerial Advisory Council on Skilled Migration, a new tripartite ministerial advisory council, which is not necessarily prescribed in legislation, be established to report to government on skilled migration issues.

1.2 That the new ministerial advisory council be supported by a dedicated labour market analysis resource.

3.2 That the new ministerial advisory council provide advice on those occupations where some concern exists and recommend additional requirements or limitations on occupations and/or regions.

4. That the market rate framework continue to operate as a core component of the 457 programme, but that the earnings threshold above which there is an exemption from the need to demonstrate the market rate should be aligned with the income level above which the top marginal tax rate is paid (currently at $180 000).

5.2 That the current Temporary Skilled Migration Income Threshold be retained at $53 900 p.a. but that it not undergo any further increases until it is reviewed within two years.

5.3 That the two roles currently performed by the Temporary Skilled Migration Income Threshold (that is, acting as a determination of the eligibility of occupations for access to the scheme and as an income floor) be more clearly articulated in the 457 programme, and that consideration be given to accepting the eligibility threshold as up to 10 per cent lower than the Temporary Skilled Migration Income Threshold.

5.4 That the government give further consideration to a regional concession to the Temporary Skilled Migration Income Threshold, but only in limited circumstances where evidence clearly supports such concession.

5.5 That in circumstances where the base rate of pay is below the Temporary Skilled Migration Income Threshold, the current flexible approach adopted by the department, taking into account guaranteed annual earnings to arrive at a rate that meets the minimum requirement of Temporary Skilled Migration Income Threshold be continued and made more visible to users of the programme and their professional advisors.

6.1 That the current training benchmarks be replaced by an annual training fund contribution based on each 457 visa holder sponsored, with the contributions scaled according to size of business.

6.2 That any funding raised by way of a training contribution from sponsors of 457 visa holders be invested in:

a) training and support initiatives, including job readiness, life skills, and outreach programmes for disengaged groups, particularly youth who have fallen out of the school system;

b) programmes allowing employers to take on apprentices/trainees from target groups, including Indigenous Australians and those in rural and regional areas;

c) mentoring programmes and training scholarships aimed at providing upskilling opportunities within the vocational training and higher education sectors that address critical skills gaps in the current Australian workforce. Target sectors include those industries, such as nursing and the IT sector, that rely heavily on 457 workers; and,

d) training and support initiatives for sectors of critical national priority. Target sectors include industries experiencing significant increase in labour demands, such as the aged care and disability care sectors.

6.3 That funds raised through the training contribution be dedicated to this training role and that the government reports annually on how these monies are spent by the Department of Industry.

6.4 That there be a new sponsor obligation to ensure that the cost to the sponsor of the training contribution cannot be passed onto a 457 visa holder or third party.

7.1 That the English language requirement be amended to an average score. For example, in relation to International English Language Testing System, the 457 applicant should have an average of 5 across the four competencies (or the equivalent for an alternative English language testing provider).

7.2 That greater flexibility be provided for industries or businesses to seek concessions to the English language requirement for certain occupations on a case by case basis, or under a Labour Agreement, Enterprise Migration Agreement or Designated Area Migration Agreement, as appropriate.

7.3 That consideration be given to alternative English language test providers.

7.4 That consideration be given to expanding the list of nationalities that are exempt from the need to demonstrate they meet the English language requirement.

7.5 That instead of the current exemption which requires five years continuous study, five years cumulative study be accepted.

8.1 That there be targeted training for decision-makers in relation to the assessment of the genuine position requirement.

8.2 That before decision-makers refuse a nomination on the basis of the genuine position requirement, the sponsor be invited to provide further information to the decision-maker.

9. That the government should explore how skills assessments could more appropriately recognise a visa applicant’s experience.

10.1 That Standard Business Sponsors should be approved for five years and start-up business sponsors for 18 months.

10.2 That as part of the government’s deregulation agenda, the department should develop a simplified process for sponsor renewal.

10.3 That the department consider combining as many sponsorship classes as possible.

10.4 That when more detailed information is available, the department should investigate the alignment of overseas business and Labour Agreement sponsorship periods with the general Standard Business Sponsorship approval period.

10.5 That the timeframe for the sponsor to notify the department of notifiable events as set out in legislation should be extended to 28 days after the event has occurred.

10.6 That the department should explore options that would enable the enforcement of the attestation relating to non-discriminatory employment practices.

10.7 That it be made unlawful for a sponsor to be paid by visa applicants for a migration outcome, and that this be reinforced by a robust penalty and conviction framework.

11. That the government should review the fee structure, especially for secondary visa applicants and visa renewal applications.

12.1 That sponsors be required to include as part of the signed employment contract:

a) a summary of visa holder rights prepared by the department; and,

13.1 That consideration be given to creating streamlined processing within the existing 457 programme as a deregulatory measure. To maintain programme integrity, streamlining should be built around risk factors including business size, occupation, salary and sponsor behaviour.

14.1 That Labour Agreement negotiation times be significantly improved to enable a demand-driven and responsive pathway for temporary migration, where the standard 457 programme arrangements are not suitable.

14.2 That to enable the Labour Agreement pathway to be more open and accessible for additional industry sectors, consideration be given to the development of other template agreements that will address temporary local labour shortages in industries of need.

15.1 That 457 visa holders be required to work for at least two years in Australia before transitioning to the Employer Nomination Scheme or Regional Sponsored Migration Scheme, and that consideration be given to the amount of time required with a nominating employer being at least one year.

15.2 That consideration be given to reviewing the age restriction on those 457 visa holders transitioning to the Employer Nomination Scheme or Regional Sponsored Migration Scheme.

15.3 That consideration be given to facilitating access for partners of primary sponsored 457 visa holders to secure permanent residence under the Temporary Residence Transition stream.

16. That consideration be given to the allocation of more resources to programmes aimed at helping sponsors understand and comply with their obligations, whether those programmes are delivered directly to sponsors or through the migration advice profession.

17. That greater priority be given to monitoring, and that the department continue to enhance its compliance model to ensure those resources are applied efficiently and effectively.

18.1 That there be greater collaboration between the department and the Australian Taxation Office to uphold integrity within the 457 programme and minimise the burden on employers.

18.2 That a change to 457 visa conditions be introduced to place an obligation on the visa holder to provide the department with their Australian tax file number.

19.1 That the Fair Work Ombudsman’s current complementary role in monitoring compliance and referral of findings to the department for action should continue.

19.2 That the department should provide information in real time that is both current and in a format compatible with that of the Fair Work Ombudsman.

20.1 That the department monitor decisions of the Fair Work Commission, so as to determine if sponsors have breached obligations or provided false and misleading information.

20.2 That the department require sponsors, when lodging a new nomination application to certify that there has been no change to the information provided to the department in relation to whether the business or an associated entity has been subject to “adverse information” as that term is defined in the legislation.

21.1 That dedicated resourcing be made available to the department to enable the investigation and prosecution of civil penalty applications and court orders.

21.2 That the department disclose greater information on its sanction actions and communicate this directly to all sponsors and the migration advice profession as well as placing information on the website.

22. That the department investigate the feasibility of system improvements that facilitate greater linkages with information held by other government agencies.

At the present time, the “Robust New Foundations: A Streamlined, Transparent and Responsive System for the 457 Programme” report simply stipulates recommendations made by the independent panel to the DIBP.  We are yet to discover from the DIBP Minister whether or not these recommendations will be implemented.  We will keep our clients informed as to if and when these recommendations are adopted by the DIBP.

The information on this website is intended only to provide a summary and general overview on relevant matters. It is not intended to be comprehensive nor does it constitute legal advice. You are advised to seek legal or other professional advice before acting or relying on any of the content contained in this website.